Ideas began with drawings on napkins which then progressed to wood and plastic mock-ups. When Rodger thought a design might work, he hired a machinist to fabricate his designs out of aircra 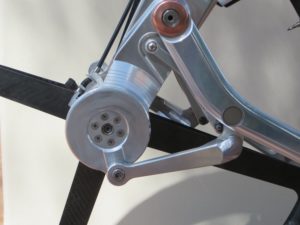 ft grade aluminum. Along the way, there were ideas that just didn’t work, but many that did. Getting something to work mechanically is doable but pairing a mechanical device to fit the human anatomy is not that easy.  All the movements that take place within the sagittal plane involving anterior or posterior movements of the body or limbs must be addressed.  In simple terms, a bicycle needs to feel good!

Designing a carbon-fiber frame, weight is always a consideration, but the greater concern is catastrophic failure. Composite frames manufactured in the past literally split apart under stress. To eliminate that problem, NuBike has an internal carbon-fiber “I-Beam” molded inside the shape as a secondary structure yet the frame still weighs less than 3 pounds.

A new computer optimized frame will weigh even less and it will accommodate most popular off-the-shelf components; wheels, saddles, handlebars, etc.  With the project on track, Rodger applied for a Patent. But then…another challenge. There was so much power and torque going to the rear wheel, axles were literally twisting into pretzels. At the time, he used the strongest metal and hardening processes known to man but the axles kept failing. Discouraged, to say the least, he shelved the project and cancelled his Patent application.

About a year later, Rodger’s engineer discovered an exotic new metal being used in military applications. It takes special equipment to shape and harden but it works perfectly.

Persistence paid off and NuBike met the challenge!  By eliminating the chain, it’s capable of going faster with less effort using the mechanical advantages of leverage and gravity. Longer pedal cranks deliver more power to the rear wheel. Gravity and near vertical pedaling, combined with the rider’s weight, produces continuous force throughout the entire pedal stroke… not just for part of it. There’s less stress to the hips, knees and ankles and it’s easy to store securely. Simply put, NuBike is more efficient and the concept will practically work on all bikes: Beach Cruisers, Mountain Bikes, Kids Bikes and even Rickshaws!

The Owner and Inventor 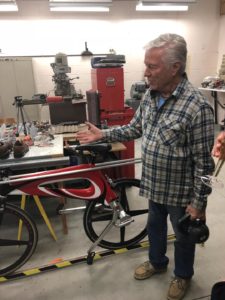 Rodger Parker has lived and worked in the Los Angeles area all his life.  He married early and had 3 children. He studied film and video at Columbia College and Loyola University. Rodger worked for ABC-TV for 9 years, CBS-TV for 6 years and won several broadcasting awards during those times. He started his own production/post-production company in 1976, grew it to 60 employees, and sold it 26 years later. In 1963, Rodger became a pilot and earned his multiengine commercial rating.  Since selling his production company, Rodger has pursued his inventor passion, building underwater camera housings, building and maintaining several experimental aircraft, built products for airplanes, and invented/patented a chain-less bicycle using aircraft techniques and materials.